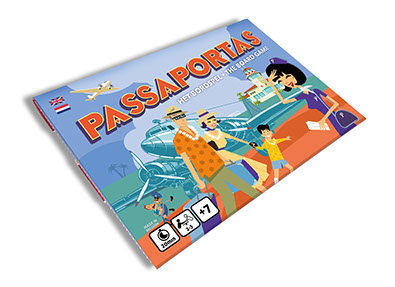 We are in the fifties. Each player is a travel agent and is in charge of taking a plane ride for 3 groups of passengers. The first to bring all travelers to their destination wins the game. 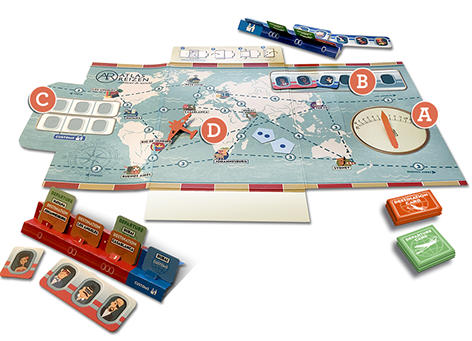 You make blind take-off stacks of these 3 types of cards with the city names facing down. 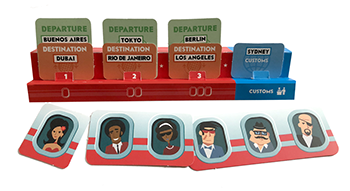 Each player takes 3 boarding cards and 3 destination cards and places them in the received order in his cardholder, as indicated in the illustration. So each player has to take a plane ride for each group.

Per customs card holder only the city name of the first card is visible, exclusively for the player himself. The order of the cards may not be altered.

III. THE FIRST PASSENGERS STEP ON THE PLANE

All passengers travel along with the same plane. There are only 6 seats.

Determine freely who will start. Then you play clockwise.

IV. COURSE OF A GAME TURN OF ONE PLAYER:

1 Fueling, flying and landing (not mandatory)

2. Ask loudly whether passengers should get out and/or board.

First, the passenger groups (of all players) who are already in the plane and who

have this city mentioned on their red destination card, disembark.

A customs card stacked at the top of a players cardholder can be used when the plane has landed at the designated location. (Not required). This card can be used by the player to designate in the plane or customs office one passenger group of one opponent and to refuse their passport.

The affected player takes back his target passenger group.

The customs card used is placed on the discard pile and can no longer be used during this game.

If using the customs card creates enough space in the airplane, you can still enter the plane:

Now you are allowed to remove all passengers from the customs office. You can put them aside. Hurray, one trip completed. Now the next player can refuel.