RULES OF THE GAME

in Dutch, English, French and German.

We are in the fifties. Each player is a travel agent and is in charge of taking a plane ride for 4 groups of passengers. The first to bring all travelers to their destination wins the game. 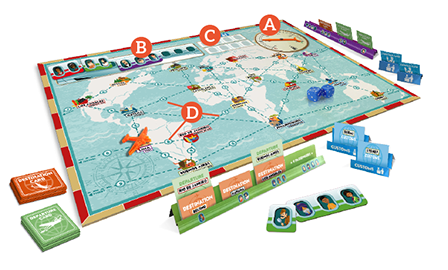 You make blind take-off stacks of these 3 types of cards with the city names facing down.

Each player takes 4 boarding cards and 4 destination cards and places them in the received order in his cardholder, as indicated in the illustration. So each player has to take a plane ride for each group. 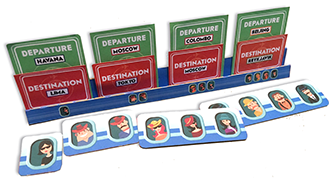 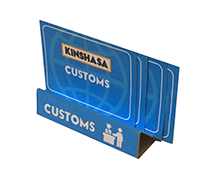 Per customs card holder only the city name of the first card is visible, exclusively for the player himself. The order of the cards may not be altered.

III : The first passengers step on the plane

All passengers travel along with the same plane. There are only 10 seats.

If you play with 2 or 3 players, 2 seats are occupied by unknown travelers. In this case, place the card of 2 passengers, showing an unused color in the plane. These passengers will remain in the plane during the full game. With 4 or more players no seats are permanently occupied.

Determine freely who will start. Then you play clockwise.

IV : Course of a game turn of one player:

1 Fueling, flying and landing (not mandatory)

2. Ask out loud whether any travelers need to get off or to board.

First, the groups of passengers (of all the players) who are already in the plane and who have this city on their red destination card, get off the plane.

Then, every player (the starting player first and clockwise) makes sure that all passengers who have to take off in this city, are boarding.

A customs card stacked at the top of a players customs card holder can be used, when the plane has landed at the specified location. (Not required).

So this player may designate in the plane or in the customs office one group of passengers of one opponent and refuse their passport.

The used customs card is put on the stack and cannot be used any longer during this game.

Remark: if a player with a customs card is indicating (too early) a group of travelers, before all passengers have disembarked and boarded, those other passengers can still go out and in the plane.

4. Last minute boarding (the player in turn is still first)

If, by the use of the customs card,  there would be enough space in the airplane again, you can still enter the plane now:

Now all passengers who are still in the customs office may be removed from it. You can put them away. Hurray, the trip has been completed.

After this, the next player may refuel.

Remark 1 : When playing with 5 or 6 players, you can limit the game time to the normal period (30’ to 45 ‘) by agreeing that the players should not make the trip with 4 people.

Remark 2 : In the box, you find a token in every color.

You can use it one-time as a wild card to fuel an extra 10°°° liter, but just not in your last round.